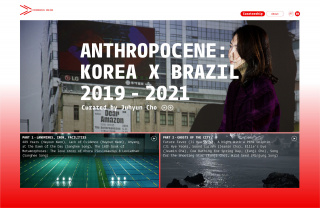 Promociones arteinformado
Descripción de la Exposición
The dystopian world that the Anthropocene will bequeath to the future is a crucial focal point for contemporary South Korean artists. Anthropocene: Korea x Brazil 2019-2021 brings the best of this production to Videobrasil Online. Throughout January, the website features a selection of artworks by six major Korean video and film artists, organized by Juhyun Cho, head curator of the Ilmin Museum of Art, in Seoul. In February, it hosts a solo exhibition of works by artist Ayoung Kim, who represented Korea at the 56th Venice Biennale. An associate researcher at the Center for Anthropocene Studies, KAIST, Juhyun Cho takes a special interest in the relationship between art and new media. The animations, installations and videos which she brings together in Anthropocene investigate the clash between the futures envisioned by science, technology, and capitalism, and the future as it actually presents itself. Anthropocene features pieces by Hayoun Kwon, Sanghee Song, Eunji ... Cho, Jeamin Cha, Minjung Song, and Ji Hye Yeom. According to the curator’s statement, “these artists work on the boundary that distinguishes between normality and abnormality through various forms of documentary-based works.” In February, Videobrasil airs a retrospective of the works of Ayoung Kim, one of South Korea’s foremost contemporary artists. By superimposing narratives and visual elements into particular configurations of space and time, her performances, videos and installations explore the issues of the recent history of Korea, imperialism, and the migration of capital. Anthropocene: Korea x Brazil 2019-2021 is a collaborative project by Associação Cultural Videobrasil and Ilmin Museum of Art, in Seoul, in partnership with ARKO Fund (Arts Council Korea). It celebrates 60 years of diplomatic relations between Brazil and South Korea. The project started out with an exhibition held in 2019 at the Ilmin Museum of Art, with works by Brazilian and South Korean artists, curated by Juhyun Cho with the collaboration of Videobrasil director Solange Farkas. A second exhibition, scheduled for 2020 in Brazil, was adapted for online viewing due to the ongoing Covid-19 pandemic, and will air on January 4 on Videobrasil Online. “It’s an honor to bring to Brazil, for the very first time, the political, philosophical and ecological views of contemporary Korean artists, who explore the relationship between the dire ongoing global crisis and the impact of human activity on our planet,” says Solange Farkas.