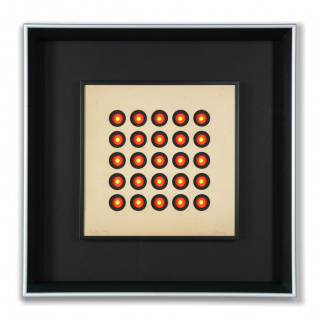 Descripción de la Exposición
“In an era filled with ever greater speed, ever-surpassed records; in the air, on water or on land, and with limits, such as the sound barrier, ever more briskly crossed, Optic and kinetic Arts bring dynamogeny to a level which places the observer in a synchronous state, with the whole mobiles moving at high speed in his daily atmosphere”- Arnauld Pierre Espace Meyer Zafra is pleased to present a collective exhibition, entitled “Déplacements”. From July 15, 2021, to September 29, 2021, this exhibition will bring together five major artists in Kinetic Art: Marina Apollonio, Ennio L. Chiggio, Edoardo Landi, Manfredo Massironi and Grazia Varisco. The first Italian kinetic artists event took place in 1962 and was sponsored by Olivetti and organized by Bruno Munari and Soavi in Milan. The exhibition, entitled "Arte Programmata. Arte Cinetica, opere moltiplicate, opera aperta” brought together twelve Italian artists sharing the same research: Biasi, Chiggio, Costa, Landi, ... Massironi, Anceschi, Boriani, Colombo, Varisco, de Vecchi, Mari and Munari. Alexandre Quoi (Head of the scientific department of the Museum of Modern and Contemporary Art in Saint-Etienne) relates this event: “If the Arte Programmata exhibition reveals Italy's role as a laboratory in the research of the kinetic avant-garde, the concept of programmed art at the time was geared towards a whole constellation of international artists grouped together within the Nouvelle Tendance. » [Marina Apollonio joined this movement, Nouvelle Tendance, in 1965]. Despite diametrically opposed politico-societal views, the Italian kinetics of the 1960s and the Futurists of the early 20th century lived in two similar eras in terms of the expansion of new technologies. Fighting ardently against classical art, the Futurists were among the first artists to use technology in their works, and notably Marinetti in his complete theater, including television, loudspeakers and other means of communication, involving the public – thus active - at the heart of his work. Italian Kinetics, being aware of the Futurists projects and approaches, pursue and extend this inclusion of technology, as well as the public one, in order to create a fourth dimension in Art. As Alexandre Quoi said: "In a socio-cultural context marked by the progress of electronic technologies and new means of information and communication, it is an imperative transformation of the artistic object and of the behavior of the spectator, which begins to impose itself on the public and remains at the heart of the Kinetic Artists’ concerns. By integrating questions of production, design and the multiple into artistic research, programmed art also manifests a turning point in the possible relationships between art and industry. " From a purely lexical point of view, a displacement is a change of position. This desire to call the exhibition "Displacements" and not "Movement", lies in this difference from a mathematical and physical point of view between movement and displacement. Movement is the action of moving while displacement is simply a change of position, without taking into account the action and all of its components (speeds, gravity, mass, etc.). By the use of elementary geometric shapes (ex: Edoardo Landi, Strutturazione Ortogonale, 1964), Italian kinetics obtain different structural modifications of objects, thanks to different processes such as the superimpositions of planes (ex: Grazia Varisco, Spazio Potenziale 20 , 1975 / Manfredo Massironi, Collage con greca, 2002); interference from the superposition of more or less displaced frames (eg: Ennio L. Chiggio, Interferenza lineare 14.3 (4 + 5 moduli), 1969); distortion of objects (Ennio L. Chiggio, Truchet / Cloud # 8, 2011); research on the theme of concentric circles (Marina Apollonio, Dinamica Circolare Series). On the occasion of this exhibition, we came up with the idea of presenting three important Italian kinetics who, after all, have not been really exposed in France, Ennio L. Chiggio, Edoardo Landi and Manfredo Massironi, as well as two women, Marina Apollonio and Grazia Varisco; contributing to the recognition of women artists, as many major institutions have done so in recent years. By using elementary geometrical shapes, the works presented in the "Déplacements" exhibition provoke stimulating perceptions in the viewer’s eye. The visitor’s experience thus takes a major place in this event. Whether it be by manual activation or through passive viewing, the public is invited to fully participate in the experience of the work.