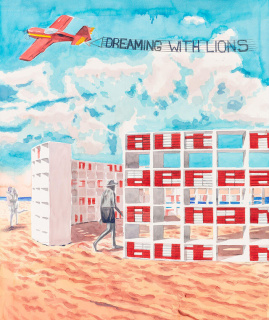 Promociones arteinformado
Descripción de la Exposición
Faena Art announces Dreaming with Lions, a monumental site-specific installation by Cuban artist Alexandre Arrechea, commissioned for Miami Art Week. Arrechea, a former member of the Cuban artist collective Los Carpinteros, is widely considered one of the most significant artists emerging out of the Cuban vanguard in the 1990s. The work is the product of a year-long reflection by Arrechea inspired by Ernest Hemingway’s seminal literary work, The Old Man and the Sea. Constructing a 62-foot diameter rotunda resembling an enormous, forum-style library, Arrechea uses beach towels to illustrate the phrases “Now is no time to think of what you do not have. Think of what you can do with what there is,” and “But man is not made for defeat. A man can be destroyed but not defeated,” taken directly from Hemingway’s text. Materials like beach towels signal Arrechea’s mode of working site specifically, a process he prefers to reserve-engineer ... rather than approach in its more traditional context. Dreaming with Lions as a living monument to the sheer force of the human spirit. It embodies our ability to withstand relentless and enormous challenges and persist, even in the face of defeat. Relying on the architectural potential of a forum-style structure to reinforce these ideological messages, the installation is a continuation of Arrechea’s investigation of public spaces and their philosophical legacy as interpretative centers of power, hierarchy and social progress. Alan Faena stated, "We are honored to continue our long-lasting commitment to support Miami’s cultural landscape. In these complex times, art plays an essential role in uniting us in a conversation that transforms into positive actions. The choice to commission Dreaming with Lions reflects the values we stand by: hope, faith, and the strength of the human spirit, that in the face of the challenges we are confronted with today, still prevails.” Since 2015, Faena Art has been consistently dedicated to showcasing artwork inspired by and for the community of Miami Beach. The significance of this year’s commission, particularly in a moment where outdoor public art is critical to inspire audiences while maintaining a safe social distance, will preserve Faena Art’s cultural agenda, honour the continued contributions of Miami’s thriving cultural community, and celebrate the impact art makes year-round on the city. Dreaming with Lions is curated by Direlia Lazo, Faena Art's Director of Exhibitions. Grand Opening: Sunday, November 29, 2:30pm Hours: November 30–December 6, 10am–6pm Free and open to the public. About Faena Art Faena Art is a nonprofit organization that houses and produces post-disciplinary and time-based experiences. A catalyst for innovative, site-specific, and immersive creative practices, Faena Art is a transformative bridge across the Americas, between the south and the north, the popular and the experimental, activism and research. Faena Art fosters new models for performative social interaction that transcend the traditional boundaries of art, science, philosophy, and social practice.