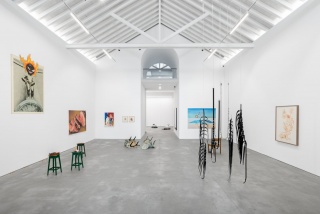 Promociones arteinformado
Descripción de la Exposición
School of Libertinage sprung from conversations – a curator is a conversationalist – with Julião Sarmento on the beaches and terraces of the Algarve in the summer of 2020. Julião described the piece that he was going to present and the conversation ensued. In fact, it had already started a while before when the artist produced a set of works for volume VI (Justine und Juliette) of a German edition (Matthes & Seitz, Munich, 1995) of Sade’s work. Conversations that are without a beginning or an end can teach us what cannot be learned in school, where the insistence is upon teaching ‘that which we do not know’. As Marguerite Duras explained so well in the film Les Enfants (1985) through the words of a mother who justifies her child’s reluctance to attend class: ‘he doesn’t want to learn things that he doesn’t know’. We shall open a ‘School of Libertinage’ (subtitle ... of the 1975 Arcádia edition of Os 120 Dias de Sodoma [The 120 Days of Sodoma]) in which to learn what the body knows already and learn what we tentatively call the soul. A new kind of school, a chance to get to know that which we already know without knowing it. Conversation, school, libertinage and so forth. SADE (1740 – 1814) Sade – who was in prison at the time – answers a letter from his wife who asked for his dirty laundry: ‘Charming creature, you want my linen, my old linen? Do you know that is complete tact? You see how I sense the value of things. Listen, my angel, I have every wish in the world to satisfy you in this matter, because you know the respect I have for tastes, for fantasies: however baroque they may be, I find them all respectable, for one is not the master of them, and because the most singular or bizarre of them, when well examined, always depends on a principle of tact’. The notion of tact allows Roland Barthes to undertake a reading of ‘Sadian’ writing that is an alternative to the common-place usually evoked by the word ‘sadism’, which exhausts itself in the dialectics of violence and counter-violence. ‘Sadian tact [délicatesse] is not a product of class, an attribute of civilization, a style of culture. It is a power of analysis and a means of ejaculation [jouissance]: analysis and ejaculation join together to produce and exaltation that is unknown in our societies and which constitutes therefore the most formidable of utopias’. (Sade, Fourier, Loyola) Sadian tact could therefore be understood as an exceptional form of attention. In 1971, the candour of Barthes’ words did not come across as too embarrassing. SÉGUR (1753 – 1830) ‘We laugh at old mores, at feudal pride and the solemn manners of our fathers, so that we can continue to enjoy our privileges (...). Freedom, royalty, aristocracy, democracy, prejudice, rationality, philosophy, combine to make delightful every day of our lives’, wrote Louis-Philippe de Ségur in his memoirs (published in 1824), at once adding: ‘and never such a terrible awakening was preceded by such a sweet sleep and seductive dreams’. Ségur was one of the ‘last libertines’, as Benedetta Craveri called them (The Last Libertines, Penguin, 2020), the last before the Terror of the French Revolution: the young aristocrats who were unable not foretell any problem that could prevent them from enjoying the pleasures inherent to their social status (in the AncienRegime) with the doctrinal optimism (liberal, why not) that Reason and the Enlightenment inspired in them. But reality is always conspiring and can hardly accommodate delightful utopias. To keep the school open we must deal with violence and war, to accommodate and negotiate the notions of Good an Evil. The problem is that no one knows how to play the characters in which Reason or Utopia are incarnations of Good. No one wants to play the roles ascribed by those who proclaim Good because prudence recommends suspicion vis-à-vis those who are sure they know what Good is. The rest is Evil. And here begins the curse and glory of the libertine. The libertine knows that he does not know enough to know what is best for others. He does not know whether he is better or worse than any other. His power is to be no matter who: ‘I slept with them; I shared their condition’ [Amália sings]. With his perverse ambiguity, the libertine liberates all he meets from the discipline or the comfort of the roles ascribed to them by convention. Such is the liberating power of Evil. A horizon of endless possibilities is thus opened. The libertine is only unable to liberate himself, but that is another matter. We oscillate between the perverse hypothesis and the utopian hypothesis, but perhaps they are the same thing as enunciations of future possibilities. Nevertheless, there is still one last hypothesis. The school of libertinage paves the way to a school of art in which everyone does whatever they want, and everyone asks them to do precisely that: whatever they want. That is what the curator asked the artists under the pretext of wanting to make an exhibition called: School of Libertinage. We all know what this title means but no one knows what it says. For that reason, artists do not make texts like these, they make artworks which we are tactful enough to pay an exceptional form of attention to. As a curator, I could have invented what the artists wanted to say with their works, but I prefer not to rob the people that I invite to visit this exhibition of that privilege. Further ahead, in the course of the conversation, we might think of a guided visit. But guided by whom? Alexandre Melo