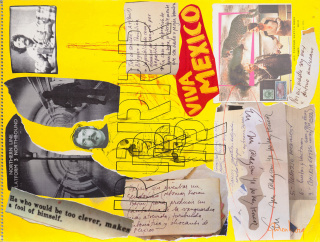 Promociones arteinformado
Descripción de la Exposición
The Institute for Studies on Latin American Art (ISLAA) is pleased to announce the opening of "Felipe Ehrenberg: Testamento". This exhibition displays, for the first time, the thirty-four collages in Felipe Ehrenberg’sTestamento (1968–2017), a retrospective and reflective assemblage of documents, photographs, writings, and drawings compiled at the very end of the artist’s decades-long career. A coda to Ehrenberg’s monumental practice, Testamento is also the fourth and final show in ISLAA’s inaugural series of exhibitions devoted to mail art and conceptual practices in Latin America. Ehrenberg’s creative activity was propelled by an indefatigable drive for experimentation and an unyielding commitment to the expansive possibilities of art. Preferring the self-defined descriptor of “neologist”—one who explores new ideas—to “artist,” he developed a diverse and influential body of work encompassing performance, mail art, artists’ books, and paintings that probed art’s role in relationship to society. He became closely aligned with the Fluxus movement in the ... 1960s and ’70s, cofounding the Beau Geste Press, a publishing haven for visual poets, neo-Dadaists, and Fluxus artists that privileged books as artistic media. In 1976, he formed the Grupo Proceso Pentágono, a pivotal collective of Mexico’s grupos movement, whose installations and actions incisively critiqued national politics and state repression under the stronghold of the PRI party. Independently, and in subsequent years, Ehrenberg produced paintings and sculptures rooted in the pop art idiom and conceptual performances that reconfigured the dynamics between artist, spectator, and environment. Completed during the final months of his life, Testamento—or “will” in English—is a deeply personal survey of Ehrenberg’s career and boundless artistic vision, piecing together fragments of previous works, recent sketches, ephemera, handwritten texts, snapshots, and photographic portraits amassed over nearly fifty years. Exemplifying his process of recycling found material and reusing motifs, Testamento assembles references to his earlier projects, containing imagery from paintings such as La caída (1968); documentation of performances including A Date with Fate at the Tate (1970) and Garbage Walk (1972); and correspondence from the Beau Geste Press. Together, the thirty-four collages offer a rare glimpse into the archives and practice of a towering artist, mounting a moving tribute to his life, his enduring influence, and the work he left behind. ISLAA would like to express sincere gratitude to Lourdes Hernández Fuentes, Felipe Ehrenberg’s widow, for recovering Testamento and sustaining Ehrenberg’s legacy. This exhibition would not have been possible without her involvement. Felipe Ehrenberg: Testamento is curated by Olivia Casa. It is accompanied by an original bilingual publication featuring an essay by Néstor García Canclini in Spanish and English, available for free at ISLAA and online. ISLAA is open from 2 to 7 PM from Tuesday through Saturday, and guests are required to follow COVID-19 precautions while on-site. To schedule a viewing, please visit ISLAA’s appointment page. Please note that each ticket guarantees entry for up to two guests during the same thirty-minute time slot. ABOUT THE ARTIST Felipe Ehrenberg (1943–2017) was a Mexican conceptual artist whose multidisciplinary work encompassed performance, mail art, mimeography, installation, painting, and collage. His formative early projects were linked to the Fluxus movement, and he was an innovator of independent artists’ publishing, cofounding the influential Beau Geste Press with Martha Hellion and David Mayor in England in 1968. He was subsequently involved in Mexico’s grupos movement as a founding member of the artist collective Grupo Proceso Pentágono, alongside Carlos Finck, José Antonio Hernández Amezcua, and Victor Muñoz. At turns acutely political, experimental, and personal, Ehrenberg’s practice as an artist was inextricable from his role as a cultural agent, teacher, writer, and publisher. His work is in the collections of the Museo de Arte Moderno, Mexico City; the Museo de Arte Carrillo Gil, Mexico City; the Museum of Modern Art, New York; the Banff Centre for Arts and Creativity; and the Victoria and Albert Museum, London; among many others. Recent exhibitions of his work include ¡La última y nos vamos! at the Galería Metropolitana of the Universidad Autónoma Metropolitana, Mexico City (2017); Beau Geste Press at the CAPC Musée d’Art Contemporain de Bordeaux (2017); Círculo abierto: Dos experiencias editoriales at the Museo Universitario Arte Contemporáneo, Mexico City (2012); and the retrospective Manchuria: Visión periférica at the Museo de Arte Moderno, Mexico City (2008). ABOUT THE ARCHIVE On the occasion of Felipe Ehrenberg: Testamento, ISLAA is delighted to announce that we will reposit a portion of Felipe Ehrenberg’s papers. This significant addition to our library and archives would not be possible without Lourdes Hernández Fuentes, the widow of Felipe Ehrenberg.