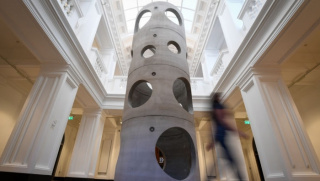 Promociones arteinformado
Descripción de la Exposición
Influenced by systems of mass production, the building industry and artisan craftsmanship, the sculptures created by Alexandre da Cunha, through the act of re-purposing, appear to be a mix between popular consumer object and archaeological relic. Da Cunha has taken these humble ideas to a monumental scale, with recent commissions for public site-specific works in Chicago, London, and São Paulo as well as other large outdoor works in US, Europe and South America. For North Hall, da Cunha presents Figurehead II: Totemic in shape and scale, the sculpture, which was specially commissioned by The Box, consists of four stacked chamber drainage rings, standing six metres tall, and placed within the circumference of the compass upon the historic foyer floor. The material of the structure and its skyscraper type stature makes a direct reference to both the post-war buildings and reconstruction in Plymouth – and the architecture of da Cunha’s birth city ... Rio de Janeiro, where concrete is a key component. In addition to Figurehead II, da Cunha is exhibiting a series of far smaller Table Works on the first floor in North Hall. These playful sculptures are presented amongst objects and artefacts that he has chosen from The Box collections, creating a dialogue that explores domestic and leisure activity through thematic and material relationships. Da Cunha displays his series Affairs in South Hall and Active Archive; a collection of beach towels bearing national flags and consumer insignia, which explores his interest in stereotypes propagated under the guise of national identity. The ensign like towels resonate with the suspended ship’s figureheads and ship’s badges as well as Plymouth’s oceanic history and location, probing ideas of occupation, boundaries and territory.