'Interlude by Francisca Sutil is a series of works of medium format that give account of her pictorial research of 18 months of work to be added to the nearly thirty years of tireless pursuit and the construction of a visual code, synthetic and deep, characterized by transparencies, color and vibration, which is but a visible expression of what this artist has taken as leit motiv throughout her life: the awareness of the evolution of man and the stages through which we go in life. Thus,each color executed by stripes that are repeated and alternate activate any vibration of the soul, leaving a halo in the memory of the observer'.

'I traveled for one year after my exhibition at the Museum of Fine Arts in Santiago in 2006. It was an introspective and solitary journey in that I set for myself to try to understand western painting more deeply. Much of the art that most touched me was the painting of Siena from the 13TH century and the entire Renaissance, for their direct colors, clean and its intimate and close character when in small formats. What I remember most about the painting of the 15th Century are not the topics but the dialog between the colors, the gold, the vermilions, and the blues. I remember the movement of the colors.

When I returned to my studio, I had surely internalized all the above, and I started in a natural form and new to me, to prepare small canvases and to experience a more direct relationship and close to the table, something different from what occurs with the paintings of grand format. In these paintings that developed between August 2007 and December 2008, appears in addition to the verticality and horizontality another perspective fruit of the undercross generating a third space.' 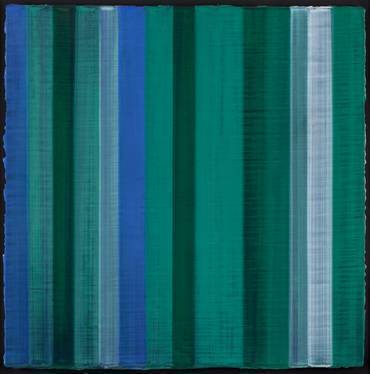