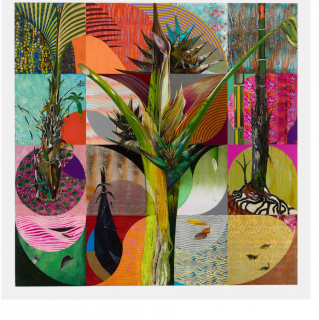 Promociones arteinformado
Descripción de la Exposición
The presentation will be available to view from Monday 25 January via Stephen Friedman Gallery’s Online Viewing Rooms and will open to the public as soon as government guidance allows. Brazilian artist Luiz Zerbini presents his second exhibition at Stephen Friedman Gallery, following his acclaimed solo show at South London Gallery in 2018. Juxtaposing organic and geometric forms, Zerbini’s paintings explore the relationship between colour, light and movement. Inspired by the Amazon and Mata Atlântica rainforests, the exhibition reflects the artist’s ongoing interest in the relationship between nature and humanity in and around Rio de Janeiro. The presentation will be available to view from Monday 25 January via Stephen Friedman Gallery’s Online Viewing Rooms and will open to the public as soon as government guidance allows. Across his career, which spans over three decades, Zerbini has developed a complex visual vocabulary at the intersection of figuration and abstraction. He first emerged within ... the generational (and global) ‘return to painting’ of the 1980s, centred in Rio de Janeiro around the Parque Lage School of Visual Arts and subsequently defined by the landmark exhibition ‘Como vai você Geração 80?’ (How Are You Doing, 80s Generation?, 1984). The exhibition at Stephen Friedman Gallery follows Zerbini's major presentation in the group show 'Trees' at Fondation Cartier pour l'art contemporain, Paris, in 2019. There the artist transformed the main gallery into an urban jungle, combining a large-scale herbarium — complete with a living fig tree — with hyperreal paintings of the rainforest and symbols of Brazilian modernity. The grid — a formal leitmotif closely associated with modernism and in Zerbini’s work a subtle nod to the mosaic pavements and façades of Brazilian tower blocks — is present in all of the paintings in the exhibition. Using it as a compositional structuring device, several pieces show geometric forms combined with lush, tropical flora. A cacophony of colour, these works convey the immersive and seductive quality of Brazil’s natural environment. A six-metre wide painting, ‘Happiness Beyond Paradise’, captures the kaleidoscopic nature of this combination to dizzying effect. Flooding the viewer’s perception, Zerbini tries to provide the impression of “being in the painting as you could be in a forest”, as he has stated. Palm fronds, coiled ferns and roughly textured tree trunks encroach upon the work’s gridded structure. These forms merge with areas of abstract mark-making, demonstrating how the artist appropriates patterns found in nature and incorporates them into his own vernacular. The rhythmic structure of the painting captures the movement of trees swaying in the breeze, lending the work a striking dynamism. Numerous paintings in the exhibition feature pure abstraction, taking inspiration from concretism and its strong emphasis on plane, line and colour. The artist plays with the optical sensations of placing certain colours and forms alongside each other, emulating the intoxicating effect of the sights and sounds of the rainforest. Hard-edged lines intersect with sweeping curves, resulting in complex, curvilinear forms of vibrant colours and textures. A series of smaller works focus on singular techniques and patterns, providing a kind of index to the range of the artist’s techniques that mingle in the larger canvases. Luiz Zerbini was born in São Paulo in 1959 and lives and works in Rio de Janeiro, Brazil. Zerbini had his first institutional solo exhibition in the UK at South London Gallery, London in 2018. Zerbini was the subject of major mid-career surveys at Casa Daros, Rio de Janeiro (2014); Instituto Inhotim, Brumadinho (2013); and Museu de Arte Moderna do Rio de Janeiro (2012). He has exhibited in galleries and museums internationally and has represented Brazil at notable biennials including the São Paulo Biennial, (2010 and 1987); Bienal do Mercosul (2001); Bienal de La Habana (2000) and Bienal Internacional de Cuenca (1996). He is also part of the renowned Chelpa Ferro artist collective. In 1995, Zerbini won the grand prize of criticism in the Visual Arts category of Art Critics of São Paulo Association (APCA). His work is included in several notable collections, such as Instituto Inhotim, Brumadinho; Itaú Cultural Institute, São Paulo; Modern Art Museum of Rio de Janeiro and Modern Art Museum of São Paulo.