Medina. Beyond the visible 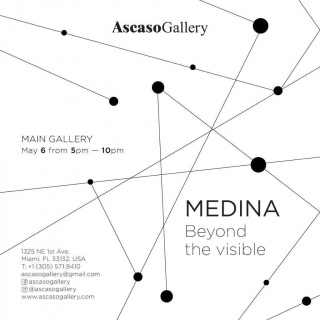 Promociones arteinformado
Descripción de la Exposición
Ascaso Gallery presents in its new spaces, the exhibition Beyond the visible by the Venezuelan artist Carlos Medina, who has brought from Paris, the city where he resides, his proposals to creates a novel group of works on his recent plastic investigations of neutrinos; along with works that relate light, shadows and geometric abstraction. The exhibition, accompanied by a catalog written by Adriana Herrera, Ph.D., will be open between May 6 and July 31, 2021. According to Herrera, “the inexhaustible vein of his art comes from this dual faculty of clearly perceiving two orders. The first response to the perfect visible geometry: to discover in the rain, as he says, 'the fragment of a line suspended in a diagonal circumstance'. That order is the source of his drops sculpted in wood or metals and arranged as precipitations in his spatial interventions.” The second order is inspired by the no less perfect ... geometry that, as the title of this exhibit points out to us, it is Beyond the visible. “If geometric abstraction developed in a manner foreign to the visible world, voluntarily separated from all referential links of the image, the renovation of Carlos Medina’s work stems from his approach to the real geometry of the visible and invisible. He invents essential imagery in geometric works built with elements of maximum simplicity, which nevertheless unfold a sort of imago mundi, a recreation of the world”, says Herrera. “He certainly dissects the order of nature, and transforms it into a source of abstract forms; and in a parallel way it enters into the invisible subatomic order, no less real, though intangible.” Beyond the Visible will display 48 artworks including spatial interventions, suspended sculptures, and wall-mounted pieces. Medina explains: “I seek to uncover the shadows that live from light and to make visible the energy and substance of the neutrino particles, that being eternal and invisible can pass through everything.” Since the seventies, anticipating even the first scientific images of these particles, he investigated this essential form of matter in multiple media. At the same time, Medina, whose international career has been widely recognized, is working on the intervention with sculptural furniture for the Gare Bussy St. George, the gateway to EuroDisney, with the support of the Atelier Cruz-Diez in Paris. About the Artist Venezuelan sculptor graduated in Pure Art and Art History at the School of Plastic Arts of Caracas. Harvest successes from a young age: at the age of 22 he held his first solo exhibition at the Museum of Contemporary Art in Caracas. At the age of 25, the Italian government gives him an scholarship to train in Carrara, Italy, staying for seven years and projecting his activity towards central Europe. With twenty-two exhibitions in national and international Museums, recognized for his participation in symposia and biennials in America, Asia, and Europe. He is currently living in Paris and is represented by important European galleries. In the United States, he has been an Ascaso Gallery artist since 2013, attending fairs and presenting four emblematic exhibitions in Caracas and Miami. He is the creator of twenty-six monumental public works and worthy of more than twenty national and international recognitions. Always within the geometric abstraction, its innovative proposals on the wall or with the intervention of sculptural spaces, represent the essential and imperceptible geometrization of the universe. About the Gallery Based in Miami and Caracas, with a program that has run for thirty-five years supporting artists like Jesús Soto and Carlos Cruz-Diez since their early stages. By December 2019 Ascaso Gallery relocated to a new exhibition space with over 11,500 square feet in Miami's booming Arts & Entertainment District. With its expansion, the Gallery seeks to deliver an ambitious program dedicated to Modern and Contemporary Art and its capacity within the local and international context.