Waltman Ortega Fine Art gallery is pleased to present 'Passengers', a recent series of paintings by the celebrated Cuban-American artist Arturo Rodriguez. Featuring paintings ranging in size from intimate to monumental, these works provide a hypnotic meditation on the human condition and the passage of time. The show will open with an opening reception for the artist on April 27, 2012 and will be on view until June 6, 2012.

'Airports, train stations, bus stops, parking lots ... all are a source of fascination and anxiety for me,' notes Rodriguez. 'With their constant, yet anonymous flow of traffic, these places embody some of the most impermanent and poignant paradoxes in life. I have composed each picture as both an interior and exterior landscape, in which space becomes a metaphor for loneliness.'

The humans depicted in the 'Passengers' are shown isolated or in groups; some are waiting, some embracing, others float on escalators or moveable walkways. There appears to be little interaction between them, as if they were alienated from each other as well as from their inanimate surroundings. Dominated by vast windows and skies, these compositions reveal airplanes either static or in motion, along with subtle hints of human activity through whole or cropped figures and personal effects such as cell phones, newspapers and suitcases.

Rodriguez employs a toned down palette of warm and cool grays, and earth colors, with a renewed concern for pictorial space. His reduction or refinement of formal elements, such as color and space, pays homage to Japanese ukiyo-e prints, as well as to such masters as Bonnard, Mondrian, Hopper, and Morandi.

The resulting canvases are evocative and pensive, representing a distinct point of departure for Rodriguez. Gone in this series are the anatomical distortions, vigorous handling of brushwork and color of his earlier series, such as Passages, The Ghost Archipelago, The Human Comedy, Illuminations and The Caravaggio Project. In their place is an architectural awareness, refinement of spirit and economy of scale that is both haunting and poetic.

Born in the small Cuban town of Ranchuelo in 1956, Rodriguez moved with his family to Spain where he was profoundly influenced by the art he discovered in the Prado Museum. Uprooted once again as a teenager, Rodriguez settled with his family in America, where he completed school in Miami, Florida. During this period of his life he fell in love with the music of jazz and blues, incorporating their visceral and improvisational elements into his art. Rodriguez consciously champions the theme of displacement, filtering his own experiences through images that blend reality with imagination. His large body of work encompasses paintings, mixed-media collages, watercolors and illustrations.

Widely acclaimed and exhibited, the work of Arturo Rodriguez is in the Metropolitan Museum of Art, the Israel Museum, The Norton Museum of Art, and Bass Museum of Art in addition to other major public and private collections. 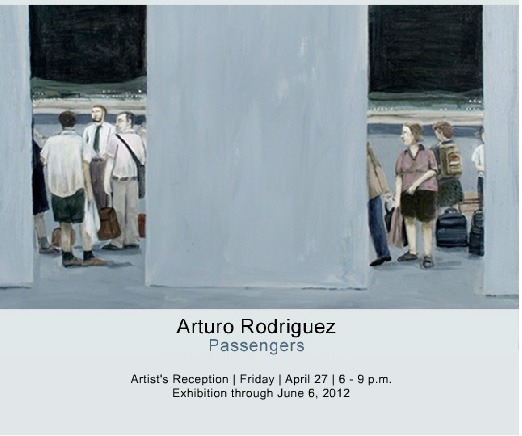