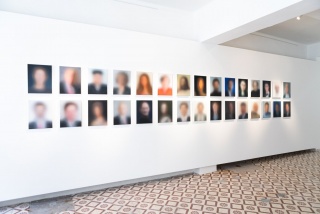 Promociones arteinformado
Descripción de la Exposición
When faced with the artwork of Fábio Colaço, the enchantment about the visual associative processes that highlight his creative process is inevitable. The study and approach themes that incorporate the conceptual core of the artist, wisely position us at the centre of the message, as the main protagonists of an artistic reality of immeasurable social, political and economic awareness. The behavioural study of a society, which claims to be evolved and at the forefront of modernity, leads us to enter the exhibition through the eyes of the artist, who, in a generous way, presents the obvious authenticity of the look on the other. The PORTRAITS series is easily explained if we consider that current society - and according to what history itself has presented us, is represented in a theatrical scene composed of leading figures that portray reality. It is not by mere historical coincidence that the word person designates a mask. ... The recognition of the fact that everyone is always everywhere, with more or less awareness, representing a role...and the leaders that Fábio Colaço portrays in this series, are no exception. The omnipresence of a set of representatives from various social, cultural and political backgrounds emanates a definition of the attitude of this century's leaders, and elevates them to a status of cosmopolitans and iconoclasts Here, Fábio Colaço raises a question: are the attributes of character and behaviour that these figures conquer in society what establishes them as references, or the simplicity of a visual veil that truly distinguishes them?! It is then that we realize that we self-flagellate as objects under the gaze of others and this perspective makes us prisoners of the outside world, triggering a feeling of embarrassment similar to the act of peeking through the keyhole and being surprised. If the portrait is a serious subject - because it is an analogy of the presentation of the self to the real world and mediator between art and social life, which intends to be the validation of the individual's praise to the public gaze - it is at this point that Fábio Colaço presents a game of visual ambiguities that forces our gaze and evaluates the spectator's referential. Images seen through a blurry screen, which seem to be gradually entering a process of dematerialisation against any naturism, that is, a space in which the entire event gives way to a potential space, the portrait of a leader, or of what we think may be a leader, since among the 30 portraits, the artist delights us with the irony of fictional figures imagined by him. "in art, both in painting and in music, it is not a matter of reproducing or inventing forms, but of capturing forces." Francis Bacon - Logic of sensation, Gilles Deleuze 1981