The body – borrows a Revolver 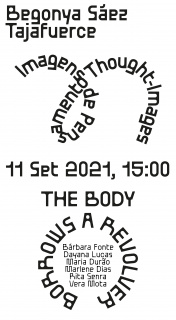 Promociones arteinformado
Descripción de la Exposición
Group exhibition in conjunction with the conference “Image-affect: Body, Thought and Desire” by Begonya Sáez Tajafuerce, part of the Cycle Though-Images. Bárbara Fonte (Braga, Portugal, 1981) graduated in 2004 in Fine Arts – Painting at the Faculty of Fine Arts of the University of Porto. She completed a post-graduation course, in 2005, in Theory and Practice of Drawing, in the same faculty. In 2011, she attended the MA in Education of Visual Arts at the Faculty of Philosophy of the Catholic University in Braga. Since 2006, she has been a Drawing and Visual Arts teacher in secondary and higher education. Since 2014, she has devoted herself exclusively to artistic production. Her artistic practice has been developed in the area of drawing, embracing photography, video, performance, and installation. Dayana Lucas (Caracas, Venezuela, 1987) carries out practical research in the field of drawing with a particular interest in the transition from drawing to sculpture. ... She has held various collective and individual exhibitions in institutional contexts and independent spaces in Portugal and Brazil. She also works as a designer in the area of culture, having collaborated with musicians, plastic artists and several Portuguese cultural institutions. In 2019, she created the project "ORINOCO", a publishing house for books and artist's editions. She was co-founder of Oficina Arara (2010–2017) and collaborates since 2010 with the collective SOOPA that unfolds in several areas: music, theatre, contemporary dance, among others. Maria Durão (Fão, 1999) studies painting at the Faculty of Fine Arts of the University of Porto. She studied cello at the Esposende Music School and later Communication Design at the Escola Artística Soares dos Reis, in Porto. Her work spans painting, drawing, collage, and photography, in a search for rare encounters between words and forms, crossing different languages that blend in one place and represent the everyday and, at the same time, step away from it. Her work is marked by the love for the book object, and all that it represents; for what is constantly changing, damaged, forgotten, and destroyed. Marlene Dias (Beira, Moçambique, 1956) moves to Lisbon to study at the age of 16, concluding her degree in Fine Arts – Painting at the Faculty of Fine Arts of the University of Lisbon in 1981. She was awarded a scholarship by the Calouste Gulbenkian Foundation between 1979 and 1980. She has taught Visual Arts in several Lisbon secondary schools. She currently lives and works between Lisbon and Alvaiázere. It is here that she finds and updates common aspects between artistic practice and the work of maintaining the surrounding natural biodiversity. Since 1986, she has been participating in both solo and group exhibitions. Rita Senra (Barcelos, 1993) lives and works in Oporto. She has a degree in Fine Arts from the Faculty of Fine Arts of the University of Porto. In 2015, under the Eramus+ program, she integrated the studio of Jiřího Příhody – Akademie výtvarných umění v Praze, in the Czech Republic. In 2019, she was in an artist residency in Clermont-Ferrand, France, in a cross-residency project by the cultural association Saco Azul. She develops her artistic work in the areas of drawing and installation, giving rise to both solo and group exhibitions since the year 2014. She has been a member of Sismógrafo since 2016. Vera Mota (Porto, 1982) is an artist whose practice is rooted in performance, sculpture, drawing and installation. Her work is identified with minimalist principles, containing common traits that point to a conflict between a quest for order and a simultaneous fascination with the possibilities of error and accident. Vera Mota grants particular attention to the economy of presence, to effort and action, seeking thus to create new spaces for objects through composition. Her practice often questions the conflicting conditions that govern the relationships of verticality and horizontality. This junction functions as a stimuli for the act of performance. The works of Vera Mota have been featured in several solo and group exhibitions, both in Portugal and abroad.