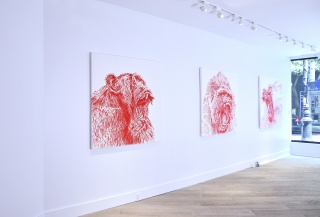 Promociones arteinformado
Descripción de la Exposición
New York, NY – Thomas Nickles Project is pleased to announce the first solo show with the gallery of William Pérez, whose work, characterized by curiosity, diversity and inventiveness, embodies transformation. The exhibition features pieces that emerged from a restlessness with the creative process, rebelliousness against any form of inertia, and a desire for radical change, particularly in light of the artist’s emigration to the United States and recent events in his native Cuba. Dramatic emotion is on display throughout the gallery in seven medium and large-scale acrylic drawings with expressive red lines tracing the faces and sharp fangs in striking individual portraits of various simians. One of the two larger canvases stands in contrast, the calm gaze of the chimpanzee representing the potential mollification of societal conditioning and the moment of Pérez’s recognition of the willingness of nature in its purest form to cry out, when necessary, to be seen. In ... a multimedia conceptual work that progresses from a monumental acrylic drawing on canvas to a performance piece, Pérez takes transformative action by segmenting the canvas with a knife, creating a series of fragments/sculptural artifacts, several of which are on display, one on a pedestal in the front of the gallery under a screen showing a documentary video of the process. His intention is the migration of the sixty final works to the furthest reaches of the globe. By documenting the stewards and destination of each piece and keeping all the participants connected, he is also shaping a map of his own, in which to recognize himself in the multiplicity. He is in effect, creating an extended version of his territory, which like the Cuban diaspora we find a vibrant and moving notion. The works on view present a constellation of ideas that defy rigid categorization or definition. Instead, the exhibition points to a vigorous manifestation of change and transformation from one state to another, outlining a bridge between painting, sculpture, installation, and performance. Therein lies the artist’s true objective: to develop, in front of our astonished eyes, the capacity of transformation, of the evolution of an idea, and with it, the potential of adaptation to new values within ourselves.