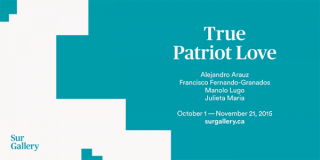 Promociones arteinformado
Descripción de la Exposición
Artists: Alejandro Arauz (Nicaragua-Canada), Francisco-Fernando Granados (Guatemala-Canada), Manolo Lugo (Mexico-Canada), and Julieta Maria (Colombia-Canada). In 1971 the National Gallery of Canada presented its first retrospective of a living female artist, Joyce Wieland’sTrue Patriot Love exhibition was considered a feminist milestone. Wieland’s objective was to “renew and begin to invent Canada’s future.” Through art, she believed, “the positive energies and people coming together would release the country from its fate.” Taken from a verse of the Canadian national anthem, the exhibition True Patriot Love at Sur Gallery in turn addresses the ways in which immigrant artists interpret and internalize patriotism in Canada, how they leave an imprint on a geographical and metaphorical landscape and map their own trajectories of their adopted homeland defining an alternative national identity. Patriotism to a country involves a perspective of identification with a nation, relying on a personal belief system to identify with a concept of homeland. However, ... we now live in a country that considers second-class citizens those who possess double nationalities and can have their Canadian citizenship easily stripped away. As immigrants to Canada, our “patriot love” is challenged, our emotional attachment to this nation is closely scrutinized and any possible perception we have of belonging to this land is instead questioned by politicians. While discourses of patriotism in Canada are scarce, immigrant voices offer a liminal space of identification, one that is not heard enough. Rather than pursue patriotism to a nation, artists in this exhibition counter attack with critical lenses. Through video, photography, performance, printmaking and drawing the artists breed new voices, translate images and interpret languages that offer the potentiality of a new Canadianness.