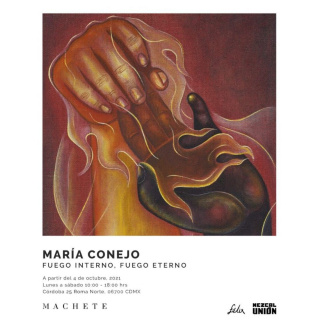 Promociones arteinformado
Descripción de la Exposición
The body is the central theme of María Conejo’s work. In her search and reflection around corporeality, she has developed a graphic narrative in which the main character is a headless female body. At the same time, she has created collaborative social impact projects that seek to propose new ways of thinking about the body and sexuality. The round, roundness, gathering around something common: circularity stands out as one of the primary visual motifs in María Conejo’s new work. Fire, which plays a central role in this series, can move in many directions. It can advance, or it can spread in all directions; it can rise; it can burn everything down. But what struck me when I first saw these pieces was that I felt their fire contained by an invisible circle, a contour not visible but still perceptible, lending it a sense of harmony. Their fire holds a danger, but ... also a sense of calm, friendship and warmth. The fire that interests María Conejo is fire that burns–of course, the only fire that there is–but also the fire around which we gather, the fire around which witches–women–gather, where they plan what to burn down and what to build in its place. The circular harmony of these paintings, contrasts with the threatening imbalance of one of its main characters: the acephalous, the decapitated woman. Conejo’s pieces explicitly refer to the characters of Yin and Yang. That duality repeats itself implicitly throughout her work: we have a destabilized character, without a center. It appears contained by the fire that emanates from its body, something shared, a common fire, a fire that ties her–joins her–to other bodies that can sustain and embrace her. Conejo engages with motifs with a long history in art and culture: fire as a key to renewal and creation; the union or disjunction of the mind and body; balance; the struggle between light and darkness–but she does so irreverently, in the best sense of the word. Her work is charged with symbols and metaphor, as much in the stories the paintings tell as in the paintings’ techniques–the use of block colors, the winks to graphic arts. Conejo’s work displays a lightheartedness and a spirit of play that is also, in its way, a feminist critique of patriarchal solemnity. María Conejo’s feminist art is also feminist critique and feminist humor. Among these timeless topics, which Conejo takes up with depth and irony, a special place goes to the question of the female body, also at the center of her Pussypedia. The headless body suberts of the Western mind-body dualism, which is resignified when those bodies are feminine and, above all, viewed apart from the patriarchal gaze on female sensuality. Visual art can’t be accused of ignoring the female body: in the history of painting, women’s bodies are everywhere. How, then, to reappropriate something so ubiquitous? It’s not about showing what is hidden, nor hiding that which has been overexploited, but proposing new ways of seeing women’s bodies, in ways that depart from the representations that have been deposited in our bodies so long that it’s almost impos- sible for us to think of an erotized gaze towards the feminine aside from patriarchal iconography. Conejo doesn’t fall, however, into the trap of dessexualization: she shows sensual bodies, full of movement and life, of light and shadow, but avoiding the masculine ideal of the body that gives itself over, that offers itself. The playful bodies of Maria Conejo’s art are available, but above all for them- selves, for their own music. Freed not only from the masculine gaze but also from their own heads, they move and find themselves, without an aim, in no hurry. They seek new balances, new attitudes, new ways of gathering that don’t exclude sex but do transcend it. Of all the impressions that Conejo’s work leaves with me, I remain most of all with feminist joy, the hug and kiss, women’s laughter. The works in this exhibition are charged with meaning. They have layers, but layers that don’t weigh down, that don’t enclose, that push up more than down. They speak of an art that can be political and playful, intellectual and sensual, profound and joyful. It’s an art that speaks out of feminist thinking, from its incarnated and sensorial quality: ideas can be sensitive. Ideas can be a party. Tamara Tenenbaum