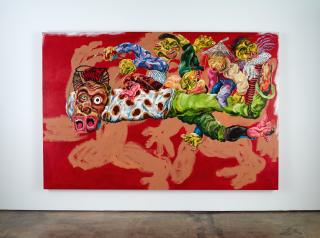 Promociones arteinformado
Descripción de la Exposición
The .insofar art gallery is thrilled to announce “O Sistema”, a solo exhibition by the young and fruitful Angolan artist Cristiano Mangovo. Its opening on the 4th of February from 4-9pm coincides with Angola’s Liberation Movement Day, also known as the Day of the Armed Struggle. Curated by the Canadian art historian Katherine Sirois, the exhibition reveals a group of previously unseen pieces that address complex socio-political issues such as hierarchy, the deep-rooted and widespread mind-set of division and opposition, or power, its conquest, exercise and preservation at all costs. Echoing a common expression in Angola, the exhibition’s title infuses Mangovo’s body of works with a lighthearted touch of political philosophy. The reference to the popular expression widely used to qualify anything that is dysfunctional, inefficient, fraudulent, inadequate or unfair highlights the questioning that haunts the two large-format triptychs on the elusive and intangible nature of the “system". Without pretending ... to reveal the profound nature of such a system of power, whose magnetism and dynamics are capable of corroding any high spirit, the exhibition aims to question and stimulate reflection on imperialism, conflicts of interest, rivalries and power games between individuals, tribes, regions, countries, genders or between states and their populations.