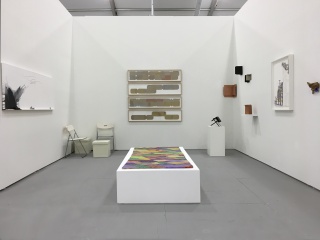 Promociones arteinformado
Descripción de la Exposición
Wednesday, December 1 – Sunday, December 5, 2021 VIP Preview on Tuesday, November 30 Miami, June 21, 2021 – UNTITLED, ART returns in real life to Miami Beach this December to celebrate its 10th edition. Under the guidance of Artistic Director Omar López-Chahoud, the 2021 presentation will feature an expanded curatorial platform with four guest curators: Natasha Becker and Miguel A. López, who will curate two sectors of the fair, and a collaboration between Estrellita Brodsky and José Falconi, who are developing a group exhibition. Brought together for their diverse perspectives and regional expertise, the curators will nurture dialogue between participating galleries and artists to generate a more global and inclusive conversation during a critical moment that marks the return of physical art fairs. Natasha Becker and Miguel A. López will be responsible for the curated sectors of the fair, selecting galleries to participate based on their submitted applications and alignment to respective ... curatorial themes. Under the title “South by South,” Becker, Curator of African Art at the de Young Museum in San Francisco, will select up to 20 galleries conceptually linked through their focus on contemporary art from Africa in connection to art from the U.S. and Latin America. López, a Peruvian writer, researcher and former Co-Director and Chief Curator of TEOR/éTica in San José, Costa Rica, will organize a concurrent presentation of 20 galleries. Drawing on his primary interest in art from Central America and the Caribbean, López aims to expand the conversation “beyond borders” by incorporating artists from around the globe – including Europe, Africa and Asia – creating a more inclusive platform for artists. He will specifically focus on work that demonstrates the performative potential of the body. Estrellita Brodsky, art historian, collector and advocate for art from Latin America, in collaboration with José Falconi, Lecturer of Latin American Art and Architecture at the University of Connecticut, will present a series of historical works and newly commissioned pieces by Latin American artists from the 1960s to today, interspersed throughout UNTITLED, ART's tent and surrounding external spaces. “We have always been known as a ‘curated fair,’ working with some of the world’s most talented curators. Over the past ten years, our commitment to increasing the presence of artists from Latin America, Africa and beyond has grown. To mark our 10th edition, we have invited guest curators to guide a presentation that honors UNTITLED, ART’s ongoing support of diverse voices, both historical and contemporary. We are very excited to return with our strongest curatorial program yet,” said Omar López-Chahoud, Artistic Director, UNTITLED, ART. “The global pandemic exposed realities that we know exist; there are economic Souths in the geographic North and Norths in the geographic South. Thus, the Global South no longer refers to geography and nation states but to spaces and peoples negatively impacted by contemporary capitalist globalization, the global art market, global environmental disasters and global viruses. I’m excited to curate an experiment in juxtaposition that attempts to transcend both geopolitics and a bipolar narrative of North and South,” said Natasha Becker, guest curator. “I’m thrilled to collaborate in this special edition of UNTITLED, ART. My curatorial contribution will be an exploration on how body movement, choreography and performativity offer other ways to reconsider ideas about citizenship, the public, collective memory, belonging and agency. The idea is to create a plural conversation regarding the power of body and its potential to reconnect with transformative desire,” said Miguel A. López, guest curator. “I am delighted to champion the work of Latin American artists through this joint curatorial project with José Falconi at UNTITLED, ART. Broadening appreciation of the work by artists from Latin America is the mission of my nonprofit program, ANOTHER SPACE, as well as the focus of my academic and philanthropic efforts. I welcome the opportunity to expand the discourse through the fair’s new curatorial sections,” said Estrellita Brodsky, guest curator. “It is an honor to be part of this special edition of UNTITLED, ART – a fair I have always admired and followed. It has been ten remarkable years for a fair that is now synonymous with cutting-edge creativity and impeccable curatorial rigor. The fact that the fair has provided an opportunity to collaborate with my esteemed colleague Dr. Estrellita Brodsky to conceptualize and produce a show on Latin American art for its premises makes this collaboration particularly special for me,” said José Falconi, guest curator. About UNTITLED, ART UNTITLED, ART is an international, curated art fair founded in 2012 by Jeff Lawson that focuses on curatorial balance and integrity across all disciplines of contemporary art. UNTITLED, ART innovates the standard fair model by selecting a curatorial team to identify and curate a selection of international galleries, artist-run exhibition spaces, and non-profit institutions and organizations, in dialogue with an architecturally designed venue. UNTITLED, ART launched the art world’s first virtual reality art fair in July 2020.